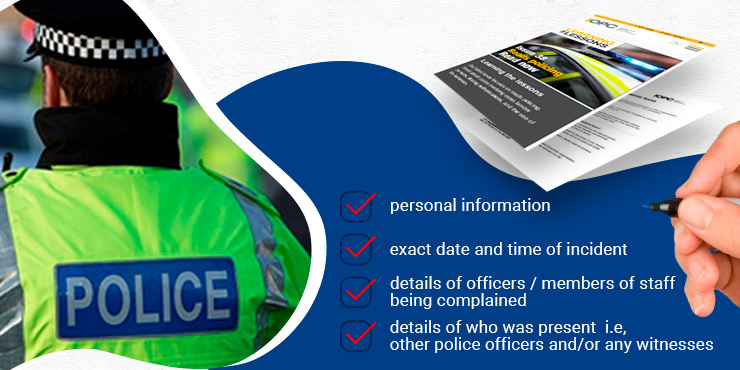 The UK police complaint system is an avenue of the public to express their complaints and dissatisfaction against the misconduct, abuse of power, and corruption in the police force. If you are unhappy and unsatisfied with how the police force have handled their duties, deal with their powers and resources and have directly caused you any damage, distress, and inconvenience, then you have the right to make a complaint against them. The proper authority to lodge this type of complaint are either the local police force’s Professional Standards Department (PSD) or the Independent Office for Police Conduct (IOPC).

To make your police complaint effective, the important details that must be included are your:

● Name;
● Date of birth;
● Residential address;
● Active contact number or email address or mailing address that the proper authority can use to get in touch with you while they do their assessment or investigation;
● The subject matter of the complaint with a clear indication that you are making a complaint against a police misconduct;
● The time and the location where the incident(s) happened;
● The police officers involved – state the details of who was present, including police officers, police staff members, and public members and express precisely what they have done;
● The details of your witnesses, if any, such as their names and contact numbers; and
● Copies of your evidence.

The methods of filing a police complaint can be:

If the complaint will be lodged by a representative, the complainant’s permission in writing with his signature is needed. A verbal permission, a voice record, or any other means aside from writing will not be honored by the authorities.