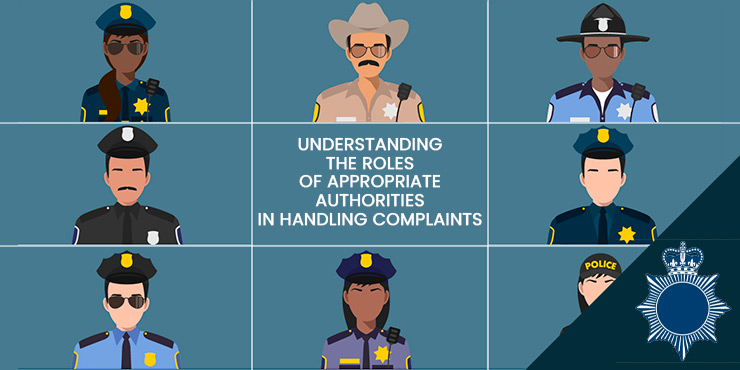 Let us face it: we have some sort of “role” that we need to partake in life. We may be working on “multiple roles” in our life, but there can be no “jack of all trades.” Like in the police force, every cop has their own roles, whether in the office or on the field, including the role of maintaining peace and order in the nation. However, some of our dear cops may abuse their positions and therefore inflict harm among the citizens. Where will you go when the police, who are expected to protect the people, misuse their powers in “protecting” the people?

In this article, we will discuss who are the appropriate authorities in handling police abuse.

What is An “Appropriate Authority?”

But who is the appropriate authority that will take on the complaints? This will heavily depend on the situation. Let us know who are the responsible people that will take a look at the citizen’s grievances.

The following roles and positions are all based on the Police Reform Act of 2002 and other relevant laws:

– Chief Officer of the Police Constabulary

If someone is filing a complaint against a local cop, the Chief Constable of the locality usually handles the complaint. They can delegate the complaint to the Professional Standards Department (PSD), in which the said department may control the cop for disciplinary actions. If a senior officer receives a complaint, another senior officer, or someone entrusted by the chief constable with an equal rank as the charged cop, may take on the case. In any other circumstances, a cop with at least an inspector rank or an officer assigned by the chief constable who has the same rank as the complained cop may handle the complaint. A complaint under investigation or outside Schedule 3 of the said law may be handled by any cop assigned by the chief officer.

The chief must not assign any person that may interfere with the investigation against the accused officer, as this may cause public distrust towards the police force in general. Most of all, an assigned person in the case should act impartially; that is, every person and incident involved in the case should be considered fair and square.

An acting chief officer may do the same, per section 41 of the Police Reform and Social Responsibility Act 2011. However, it must still act as a deputy chief and not assume the full position as a chief officer.

Suppose there is dissatisfaction in the investigation process of an accused officer (whether a local cop or the chief police officer). In that case, the local policing body may take over the duty initially assigned to the chief officer of the locality. They have the responsibility to monitor and do the protocol in the investigation of the charged officer, from start to end. This mandate is the first model of the duties of the local policing body. The commissioner also has the optional duty of interrogating the complainants, handling complaints outside of Schedule 3, and recording complaints (second model). They also have the right to inform the complainant of the status of their case (third model).

The commissioner may also delegate the duties and responsibilities on the local policing body but may not confer this responsibility to:

So there you have it. The next time you want to file a complaint towards a cop, the chief police officer of the constabulary and the police and crime commissioner are the two officers you’ll most likely encounter. These officers carry the responsibility of maintaining order and discipline among their ranks. But, as always, remember to exercise caution and vigilance in monitoring the police force’s actions. This will help in keeping the powers of the police force at bay.