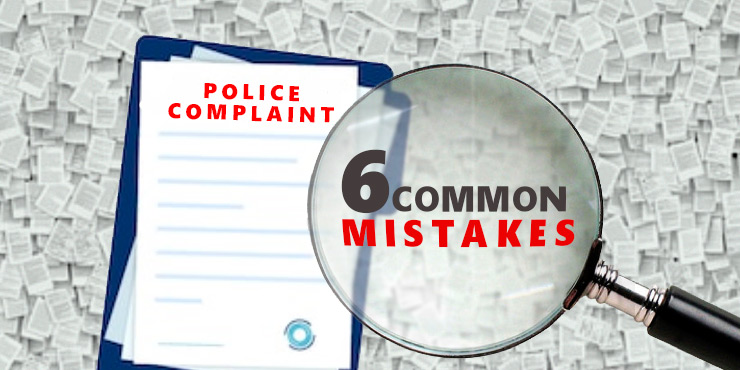 When filing a police complaint, having a no-to-do list is as important as having your to-do list. Knowing the important information that should be indicated in a complaint will bring clarity and peace. On the other hand, knowing and avoiding the common mistakes will help lessen shame and anxiety over things that you think could cause your complaint to be ineffective. The list below are the common mistakes people make when filing a police complaint and should be avoided:

Submitting the complaint to the wrong authority

• the Chief Officer of the police force
• the Police and Crime Commissioner;
• the Mayor’s Office for Policing and Crime; or
• the Common Council for the City of London

How to identify the appropriate authority

The first to be done is to identify the police force in which the complained individual is a member. 45 police forces have their area of responsibility and they cannot process a complaint against a police officer who is not their member.

The next step is to identify is the complained officer/s. If the officer/s are:

• Chief officer or Acting chief officer
If a complaint relates to the conduct of a chief officer or acting chief officer, the appropriate authority is the local policing body with responsibility for that police force area. The local policing body for the most police force is the Police and Crime Commissioners. For the Metropolitan Police Service district, it is the Mayor’s Office for Policing and Crime, and the City of London police area is the Common Council.
If it appears that the concern may be more appropriately raised with another organisation, the receiving authority will explain it to the complainant.

It is best to submit the complaint as quickly as possible while the incident is still fresh in the complainant’s mind. If it cannot be done immediately, it can still be submitted within 12 months from the date when the incident/s happened. There are instances that a complaint is submitted after 12 months and explaining the reason for the delay may be helpful however, it does not guarantee investigation.

Unauthorized representative acting on behalf of the complainant

A complainant is someone who has been the subject of abuse or misconduct of the members of the police force. If he cannot submit the complaint himself, he may appoint someone of his choosing i.e. family member, friend, legal representative, or any other person provided that he has given his representative clear and unambiguous written consent. If the complainant did not give written consent, the complaint may be considered to fall outside the police complaints system.

Minors who are 16 years and below need not give their parents or guardians to act on their behalf.

Unambiguous intention of making a complaint

When making a complaint, it must clearly state the intention of lodging a complaint otherwise the authority, in some instances, may instead treat it as feedback. It may also help if it clearly states the complainant’s expectations on how the police force will address the issue.

Emotional tone of the complaint

Any person being subjected to any type of abuse or misconduct will be affected emotionally but even though feeling angry or hurt, the tone of the complaint should be respectful and constructive. The authority reading the complaint is more likely want to help in resolving the issues brought before them. Being courteous and straightforward in our letters may help the authority in their effective processing. It is expected that we will become emotional when we are recollecting an abuse but it would be best to make the complaint when at a calm and collected state as it will enable us to focus on the important parts and avoid overwhelming the main issue or at worst, forgetting to mention it.

Lack of important information on complaint

However, being dependent on the authority to reach out to clarify the details should not always be relied on. Indicating some specific details of the incident i.e. time, place, and how the abuse or misconduct happened will be of great help for faster processing.

Sometimes, there could be a lack of information about the identity of the officer/s (name or badge number) due to how fast the incidents unfold. A physical description of the officer, however, is necessary for proper identification.

If evidence are available, indicate them in the complaint. Preserving the evidence by having photographs of damaged properties, reproducing copies of documents/video record/voice record, keeping the original documents or object of evidence in a safe repository, and having a medical certificate about the injuries must be given importance too for future inspection during the investigation.

If there are witness/es, indicate thier name and contact details in the complaint. This will help the police to reach out to them when making the investigation.

This list is not intended to be exhaustive and the information required will depend on the facts of each particular case.