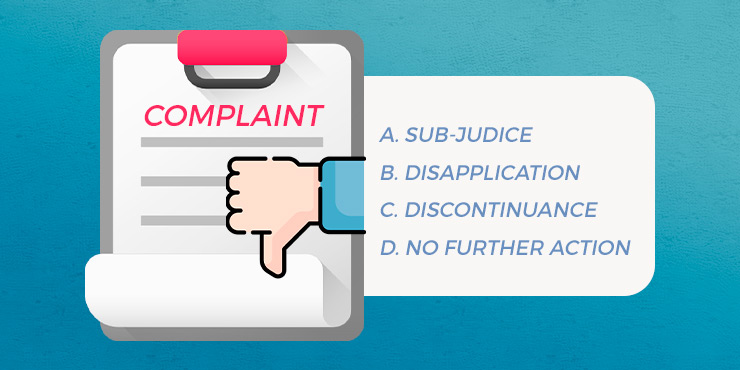 Not all complaints against the misconduct of the members of the police force lead to an investigation. Some were dealt with by local resolutions which might involve providing an explanation or information; an apology on behalf of the force; a written explanation of the circumstances and any action taken; or resolving the complaint over the counter or by telephone. Local resolutions are often used for less serious complaints such as rudeness or incivility.

In the IOPC statistical report on 2019/20, the recorded police complaints were 28,223 where 90 percent were investigated while the 10 percent were locally resolved. Below are the common defenses the police forces use when they decided not to investigate a complaint.

In some circumstances, even when you waive your right, the police force may still decide to suspend the investigation into your complaint even though you don’t want them to. They can do this after consulting with the Crown Prosecution Service.

After the court proceedings are complete, you should contact the police force concerned to restart your complaint.

The police force may apply for disapplication or discontinuance of complaints and they should provide an explanation for this and inform you of your right to appeal their decision.

When the appropriate authorities decide on how the complaints will be resolved, they use the reasonable and appropriate principle where they take several factors into account whether the complaint will be investigated or will be handled otherwise than by investigation. The factors include:

In some instances, complaints were dismissed right off the bat when the police force thinks it is fanciful. As the IOPC defines it, a fanciful complaint is one which is patently of a nature that no reasonable person could lend any credence to it. It is important to consider the complaint itself, rather than the alleged incident giving rise to the complaint.

Another example when a complaint is immediately dismissed is when the complaint contains too little information to be able to progress any enquiries and attempts to clarify it with the complainant have been unsuccessful.

There may be circumstances where some enquiries are needed before it can be established that it is reasonable and proportionate to take no further action to handle the complaint after recording it. These circumstances include, for example, where:

What could you do if you have received one of the above defenses?